We adopted Ilford (and his friend Bug) from Tracey at bRatpack Rattery.

Ilford had the most brilliant and distinct black and white markings, thus the name.  [Iflord is a company that specialises in black and white film and darkroom processing equipment]  And being such a calm and quiet rat he needed a dignified sounding name.  He later developed many nicknames which reflected his personality, including SquishFord, PlushFord, LickFord, FluffFord, and simply Ilf and Ilfie.  He was charmingly mismarked and had the quintessential black belly dot kissing target.  His fur was the shiniest softest of satin, which turned even softer and fluffier with age... no doubt from all the scritching he loved so much.

Ilford was a calm, quiet  and gentle rat.  He was a little shy with strangers, happy to let the more outgoing Bug take the limelight, so it was only us who saw how charmingly playful and cheeky he was.  His special ability was cuddling... he lived to be cuddled, tucked in under your chin, enjoying a rump scratch while he licked you madly.  He had an adorable innocent charm and inate goodness that shone through in his sweet furry face.  We will miss him dearly.

He was an adorably mismarked hoodie

With huge ears and a sweet fuzzy face

He was a little bit shy

He was adorably licky! 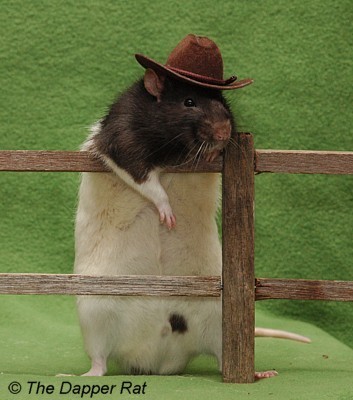 He loved his fruit!

What everyone wants for Christmas!

Gorgeous in his hammock

Ilford is such a dainty eater!  I just offered him a pikelet with butter and jam and he sat there calmly, delicately nibbling on it.  He was so fascinatingly adorable to watch that I was mesmerised as he ate half his body weight in pikelet.  :)

Ilford was a little nervous when he first came home... very shy and he spooked easily at the slightest noise.  But he's come so far!

He's now such a confident charming little rat!  He is so cute (in appearance and mannerisms) that he's hard to look at sometimes
without awwwing so painfully you clutch at your heart.  There's a lot of Roofie in him... the same simple charm, the adorable hopping
walk, the white whiskers on his chin, and the gorgeous black hoodie mismarking.

He goes completely limp when you hold him, so you can massage him and kiss his belly and squish him as much as you like.  He just looks at you with a smile of quirky calm.

He's a playful little rat.  Bug tends to drive-by groom him as he zooms past on his way to be naughty elsewhere, so he enjoys playing with mum instead.  I ruffle him over his head and he bounces joyfully about, enjoying a hand wrestle and leaping on and off my lap.

He virtually lives in his tube loft.  He tends to stretch out his arms, crossed over straight in front of him, with his head resting on them.  If he's facing the back of the cage when I bring a treat, he'll flop over on his back and accept the treat upside down.

Ilford is... in a word... adorable.  He's grown from a shy little fuzzlet into a big sweet gentle squish of an adult buck.  He's so big and soft and fluffy and playful and so calm-floppy-cuddly when held.  We often call him Plushford.

He's so charmingly hoppy and playful and has a simply adorable waddling gait that makes your heart burst when looking at him.  You just have to pick him up and squish him... which I do.  Often.  He's so gentle... he'll explore my face, gently licking my lips and snuffling and whiskering me.  Even when he comes over to see me during play time, rather than leap onto me unexpectedly (like Bug does) he just places his hands on my leg and waits for me to pick him up.  Then he snuggles into my lap and enjoys being massaged... his fur is so thick and soft that I could do this for hours.

We really needed Ilford.  He's the good rat, the soft cuddly relief we can squish when the boisterous naughtiness of Bug pushes us beyond comical levels of exasperation.  I love both of their personalities so much... two more different rats I can't imagine, but together they're a perfect match.


I awoke this morning to find Ilford had injured his leg during the night.  Bug probably shoved him off the shelf again... he's such a bad beastly buddy!  <sigh>
He was hobbling around, holding the leg up and not putting any weight on it at all.  And he squeaked when I tried to gently feel around the area for injuries or swelling.  We've seen a few limping injuries in our boys before, but never this bad.  Poor Ilf looked mopey and wanted lots of cuddling.

We took him to see the vet.  It was his first vet trip, in fact his first trip outside the house since he was a fuzzlet!  Ilford is one of those rats who is charming and outgoing with us, but freaks out when something is different.  He doesn't like new things, or new people.  So the vet visit was always going to be a challenge.  We took Bug along for moral support.

Ilfie cowered in his foofferome the whole way while Bug bounced about on top of the hammock, nose poking through the travel box lid, sniffing the air with excitement.

At the vet, I open the box and out leaps Bug who proceeds to run all over the table and introduce himself to (and try to pee on) anyone who glances his way.  I extract a reluctant Ilford from his dark hideout.

Most rats on being examined will squirm like their life depends on it.  There will be various degrees of squeaking, writhing, jerking at impractical moments, trying to climb down mum's shirt, etc.  During the entire examination Ilford sat calmly, didn't utter a single sound, or squirm, or anything!  He just sat there with his beautiful face resting in my hands, looking up at me with his deep black glossy eyes as I stroked his head.  I know it must have hurt for the vet to manipulate his leg, but he bore it with stoic dignity.  Then, when encouraged to show the vet how the injury was affecting him, he proceeded to walk across the vet table without limping... without even the merest hint of a limp!

During the examination Bug leapt noisily about the travel box, no doubt upset that Ilford was getting all the attention.

The diagnosis is a wrenched knee joint, so he's on metacam for a few days.  Upon getting home to The Grotto, Ilford immediately laid flat on the floor, holding his leg elevated beside him.  He looked exhausted and could no longer hide his discomfort.  But he hadn't let some strange vet person see him looking weak!  My sweet soft squishy boy... I just wanted to cuddle him and tell him everything was going to be alright!  Instead, I gave him a treat of metacam-laced avocado, cuddled him gently, kissed his fuzzy head and bundled him into his favourite hammock.

He spent the day sleeping off the morning's ordeal.  He's looking perkier tonight, now the metacam has kicked in.  He's managing a perfect balance between looking just injured enough to prompt an array of treats from mum, without being too injured to sit up and eat them.

Newest character trait:
Parking flat on my lap and enjoying being stroked from head to tail over and over again as he closes his eyes and zones out.  Licking my lips when I ask for a kiss.  And parking his soft furry butt on my feet when I'm cleaning The Grotto and he wants a yogurt drop.

Recent mischief:
He's so good and sweet he doesn't get up to any mischief!
Back to index

Ilford is slipping calmly into charming old age.  His hind legs have been getting progressively weaker for a few months, but in the last few weeks he's virtually lost all use of them.  He can still move about his home, although he's living on only one level now.  It hasn't stopped him from being his usual perfectly adorable self.  He's always been the best cuddler (and licker) of any rat we've known and that has only become more so now he's older.  He loves his groom time when we hold him upsidedown in our laps so he can groom his face with both hands and reach everything.  Only problem is he spends more time cheerfully grooming us than himself.

His favourite entertainment is being "hovered" about the house.  That is, I hold his back end in my hand and let him run about wherever he chooses on his front legs, his back end hovering behind him.  In this way he still gets to explore and scent mark his territory (through my fingers).

Ilford is way beyond adorable.  I can't imagine he could be more lovable and cuddly and charming than already he, but he amazes me every single day.  We're all enjoying his old age.


More tales of Ilford in The BugFord Files and on the Ratty Ramblings page.

All photographs, graphics and text on this website are Copyright © The Dapper Rat, 2000-2012.  All rights reserved.